The Breguet Marine collection pays tribute to the brand’s history as watchmaker to the French Royal Navy in the 19th century.

Abraham-Louis Breguet was arguably one of the world’s most accomplished watchmakers. From making timepieces for Napoleon Bonaparte and his sister, Caroline, to pioneering timekeeping innovations like the tourbillon, the Prussian watchmaker’s long list of accolades was certainly one to be envied.

One of the most prestigious honours he received in his lifetime was being named the official chronometer maker, or watchmaker to the French Royal Navy, in 1815. Unlike modern-day armed and naval forces, precision timekeeping was crucial to marine navigation back then. Without a marine chronometer – large clocks that captains used to keep track of elapsed time to measure distance travelled – finding your way in the open seas was nigh impossible.

With the nation’s wealth and security linked to its dominance on the high seas, the role of official chronometer maker was so important that the king himself was the one to confer that eminent title.

Today, the House of Breguet continues its founder’s legacy with exceptional timepieces that bear its indelible signature, both in design and technical mastery. In a nod to Breguet’s maritime contributions, the Marine Collection was introduced in 1990, and has grown to become one of the brand’s most beloved series of timekeepers.

In his time as the official chronometer maker, Breguet, and later, his son, produced numerous innovative marine chronometers. One of his most notable creations was the Reference No 3196, which was sold to the French Royal Navy in 1822. As a marine chronometer, No 3196 was housed in a wooden box with a suspension system, two barrels and a détente escapement. The latter, also known as a detached escapement, was chosen for its efficiency and ability to run without the need for oil, crucial for maintaining its precision when navigating the high seas.

These timekeepers would later serve as the inspiration for Breguet’s Marine Collection, which made its debut in 1990.

In fact, the most complicated timepiece in the family is the Marine Tourbillon Chronograph Ref 5837. Equipped with a tourbillon, the watch also features a horizontal clutch chronograph with column wheel control, based on Breguet’s renowned Calibre 2320/533.1. 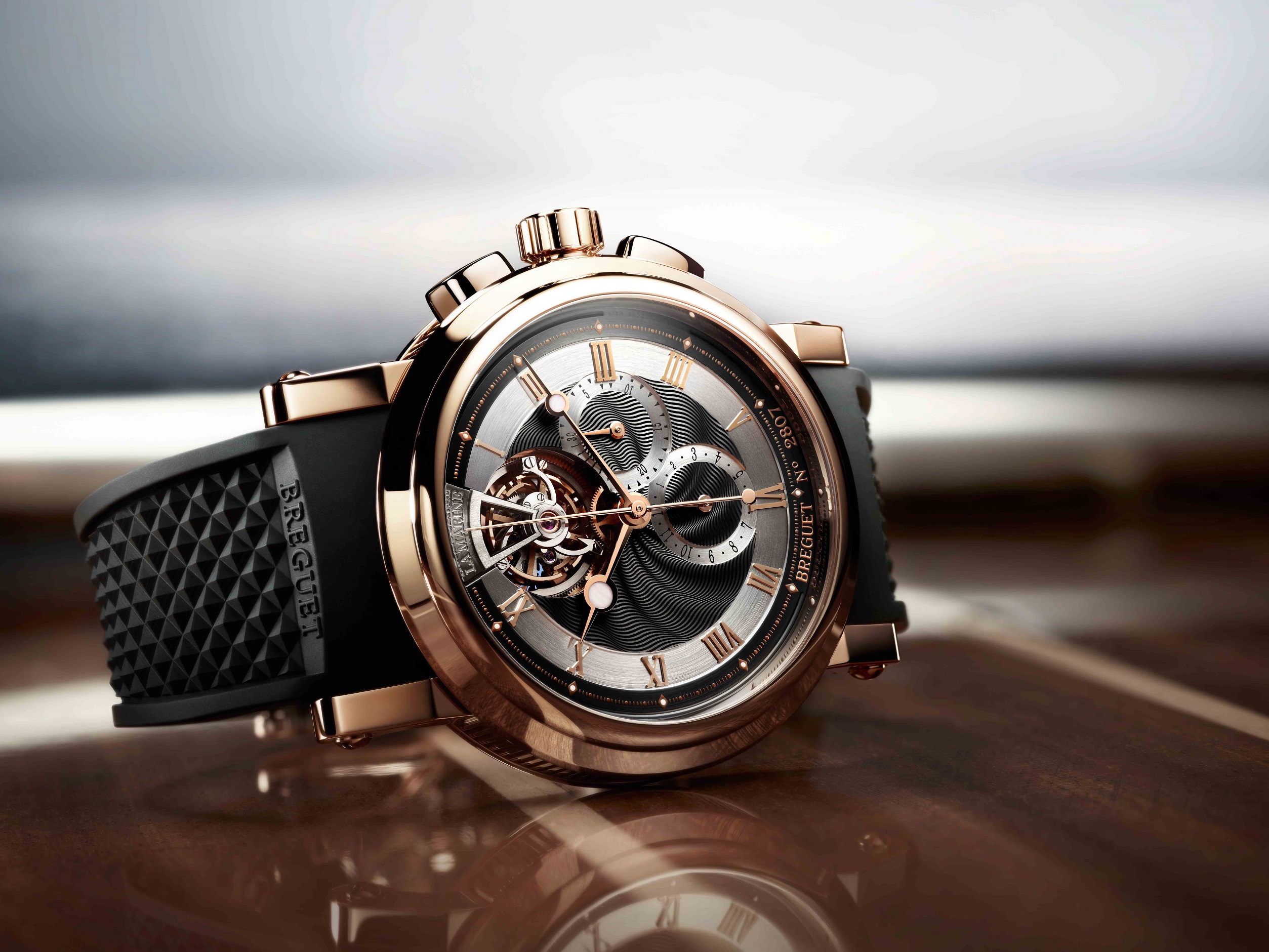 The Ref 5837 is unusual because the tourbillon is located at 12 o’clock, a departure from the usual 6 o’clock positions of most other Breguet timepieces. Crucially, this is the only timepiece in Breguet’s stable that has this combination of complications.

CHANGING OF THE GUARD

A turning point came in 2005, when the Marine Collection took on a sportier aesthetic. This new look was introduced through the self-winding Ref 5817 with grand date and large seconds.

A milestone timepiece, the Ref 5817 debuted as a watch with many “firsts” for the brand. It bore the first large display by Breguet, as well as the first rubber strap and steel case option for the collection. Today, there are nine different variations available for the Ref 5817.

The Marine Collection’s signatures have now evolved to include a bolder interpretation of the crown protectors, applied Roman numerals on the dial, as well as sporty rubber straps to complement active lifestyles.

Never one to stop innovating, Breguet introduced the next generation of Marine timepieces in 2017, updated with a contemporary look. Gold versions of the collection feature expert craftsmanship with hand-finished, engine-turned wave patterns gracing each of the dials.

In 2020, the brand also debuted integrated gold bracelets to amplify the sporty aesthetic of the Marine Collection.

This year, the House of Breguet updates its existing Marine Collection references with new versions in a warm rose gold case and a slate grey dial with the aforementioned wave pattern “guillochage”, or cool titanium with a blue sunburst dial that catches the light brilliantly.

If you’re after a sleeker and more minimalistic look, the Marine 5517 three-hand date model is a perfect match. Fuss-free but brimming with rich history, it’s versatile enough for both the boardroom and casual weekends. 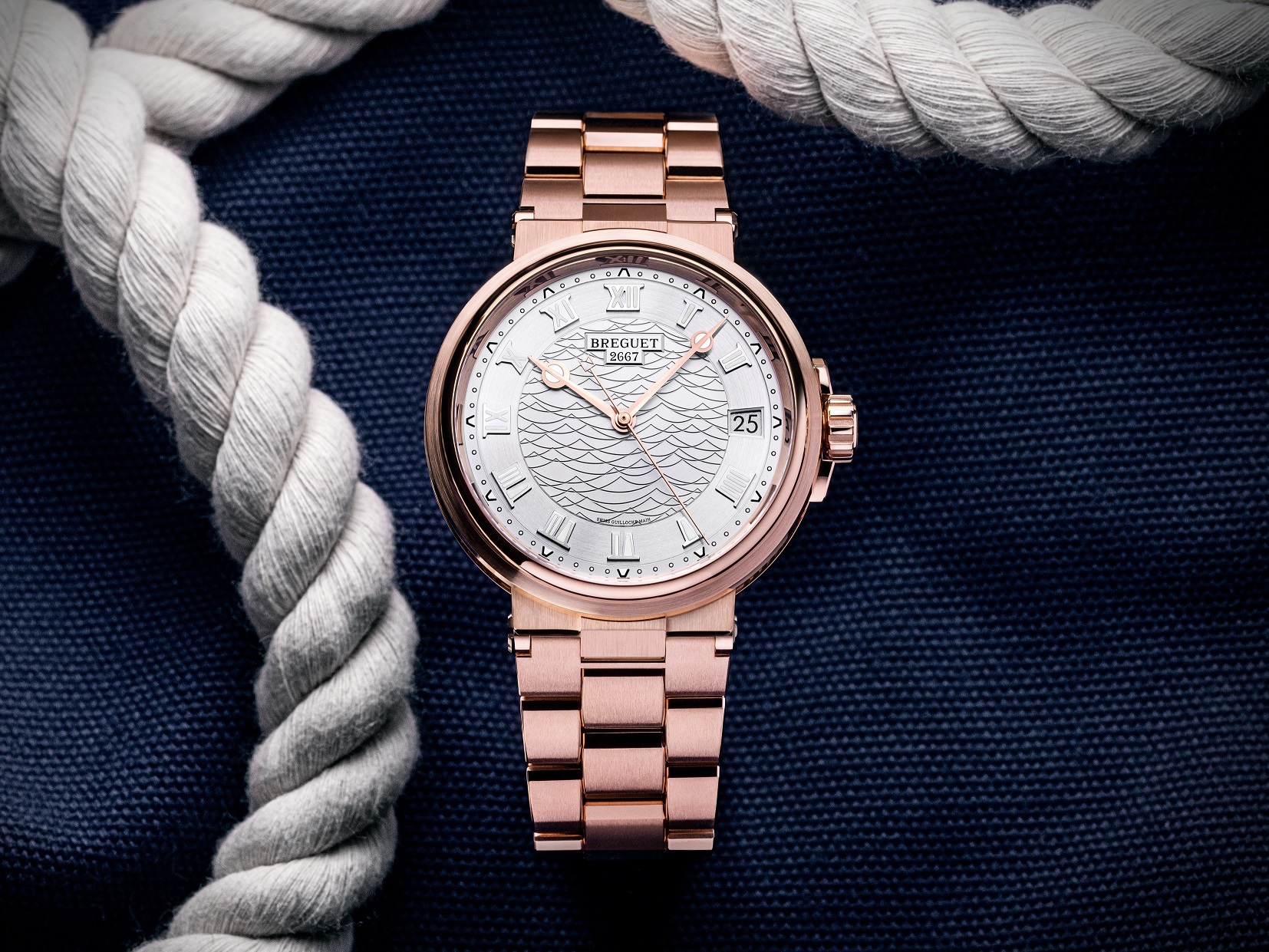 The Marine Chronographe 5527, on the other hand, exudes a sportier appeal and features a central chronograph hand with the maritime code for “B” at its end. Arabic numerals in the sub-dials contrast with the Marine’s Roman numeral indices, adding a touch of modernity for the gentleman who appreciates tradition but thrives in the contemporary world.

Finally, the Marine Alarme Musicale 5547 caters to the watch lover who enjoys a classic timepiece with added functionality. The alarm activation window can be seen at 12 o’clock, directly opposite the date window, while the time-zone display and alarm sub-dial are at 9 o’clock and 3 o’clock respectively. 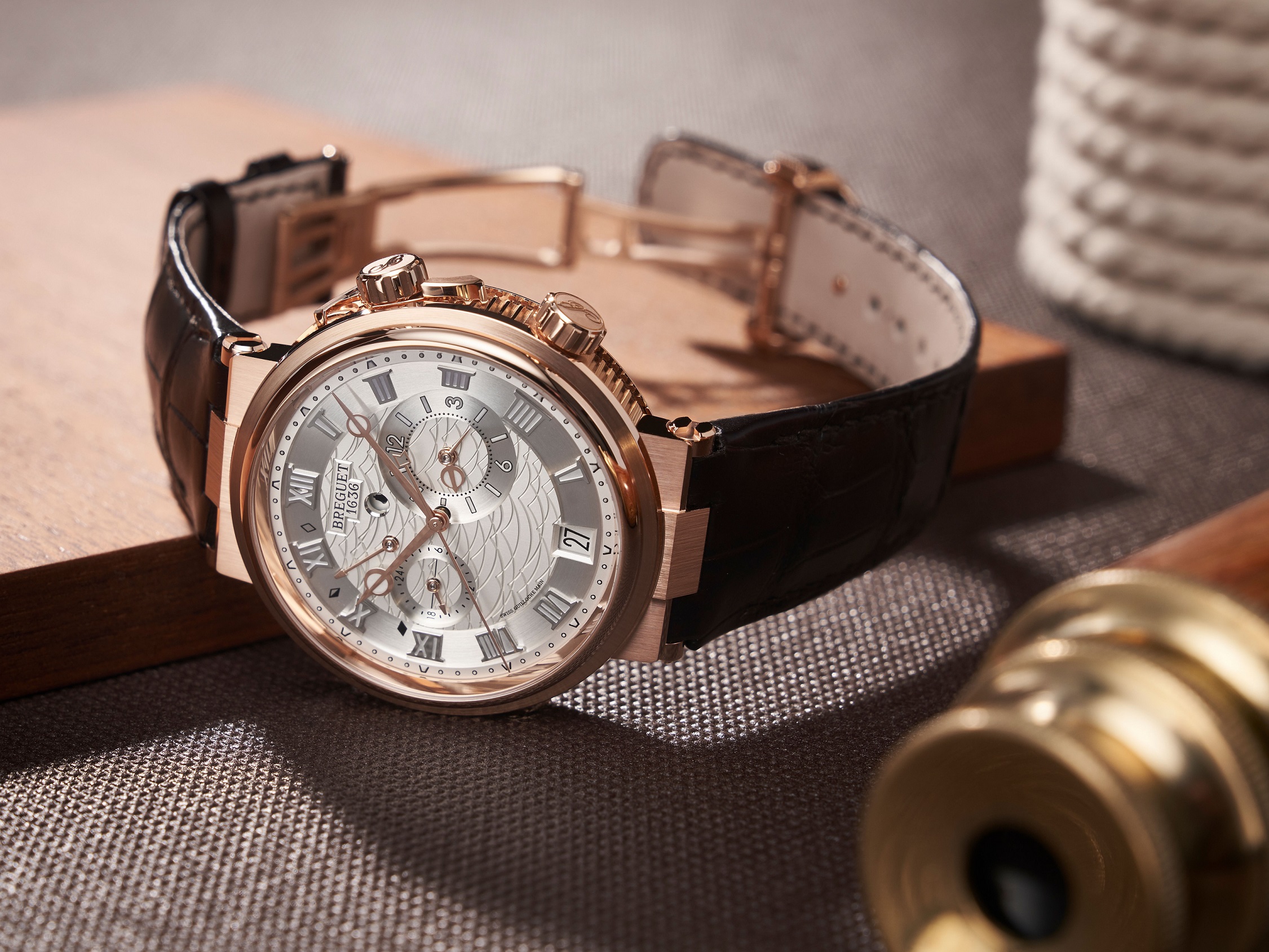 Whether you’re a maritime history buff or a watch connoisseur who appreciates Breguet’s myriad technical accomplishments, Breguet’s new Marine Collection has plenty to offer. For anyone who loves a good timepiece, it’s a range that most can certainly get on board with.