Gucci’s classic handbag is reborn as the Gucci Bamboo 1947

The brand’s icon from the 1940s retains its heritage elements, while boasting contemporary twists and interchangeable straps.

Throughout its history, Gucci has made its mark with sensational handbags that have gone on to cement their place as icons in the luxury industry. Paying tribute to its past, the new Gucci Bamboo 1947 is a recreation of the famed bamboo bag – a Gucci emblem that has withstood the test of time.

Given the success of the bamboo bag today, its humble origins may come as a surprise.

Shortly after World War II, Gucci artisans and designers were under pressure as materials and goods in Europe were rationed and there was little to work with. The artisans turned to bamboo from Japan, which was not restricted.

Making the most of the situation required the artisans to innovate with the expertise and knowledge they had acquired and the result was a patented method of shaping bamboo. This method is still used today in the production of the bamboo bag, with the bamboo cane skilfully heated over a flame to soften and mould it into the desired handle shape.

With this revolutionary material, the first bamboo bag was born in 1947, boasting handles and closures made from bamboo stalks. Its novelty and uniqueness made it an instant success, further driven by how inexpensive, light and wear-resistant the bags were. Launching the bamboo bag into the luxury market post-war was a mark of Guccio Gucci’s entrepreneurial spirit but was only possible through Gucci’s Florentine artisans who took up the challenge and successfully married leather with bamboo.

The unique bag would later be seen on the arms of notable names like actresses Ingrid Bergman and Elizabeth Taylor, as well as royalty like Princess Diana, rapidly raising its status. Recognised as a vital part of Gucci’s heritage, bamboo has continued to feature in the brand’s collections since. 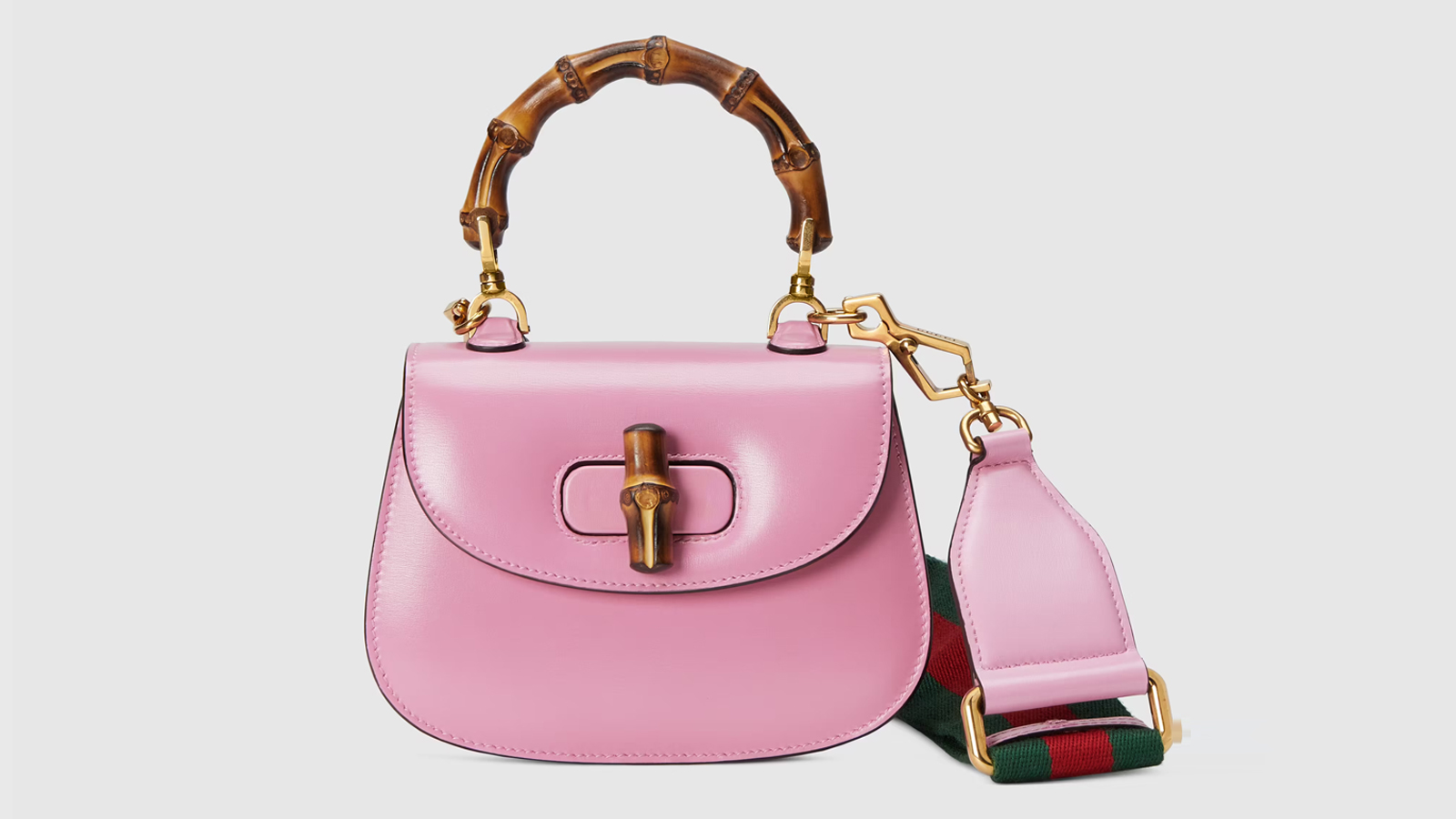 Since 1947, the bamboo bag has seen many iterations.

Today, the signature line is presented through a contemporary lens by creative director Alessandro Michele with an infusion of distinctive details. Variations include a mini belt bag crafted with bamboo and the label’s popular GG Supreme canvas.

The Gucci Bamboo 1947 features the same glossy, curved bamboo handles and closures as the original from the 1940s but with new contemporary characteristics. For starters, the top handle bag comes in three sizes – medium, small and mini – to suit various occasions. All sizes come in cuir leather, white leather and black patent leather. The small and mini sizes are also available in cheerful hues of bright orange, marigold yellow, pink, azure and bright green, as well as in crocodile and python prints.

To make it more versatile for today’s world, the Gucci Bamboo 1947 has two types of straps that allow it to be worn in different ways. Carry it on the shoulder or as a top handle with the adjustable, detachable leather strap and signature web shoulder strap – the choice is yours.

Intended to be contemporary and genderless, the bags have been featured with men’s ready-to-wear looks in the Gucci Aria collection, making it an iconic fashion statement that belongs to anyone. 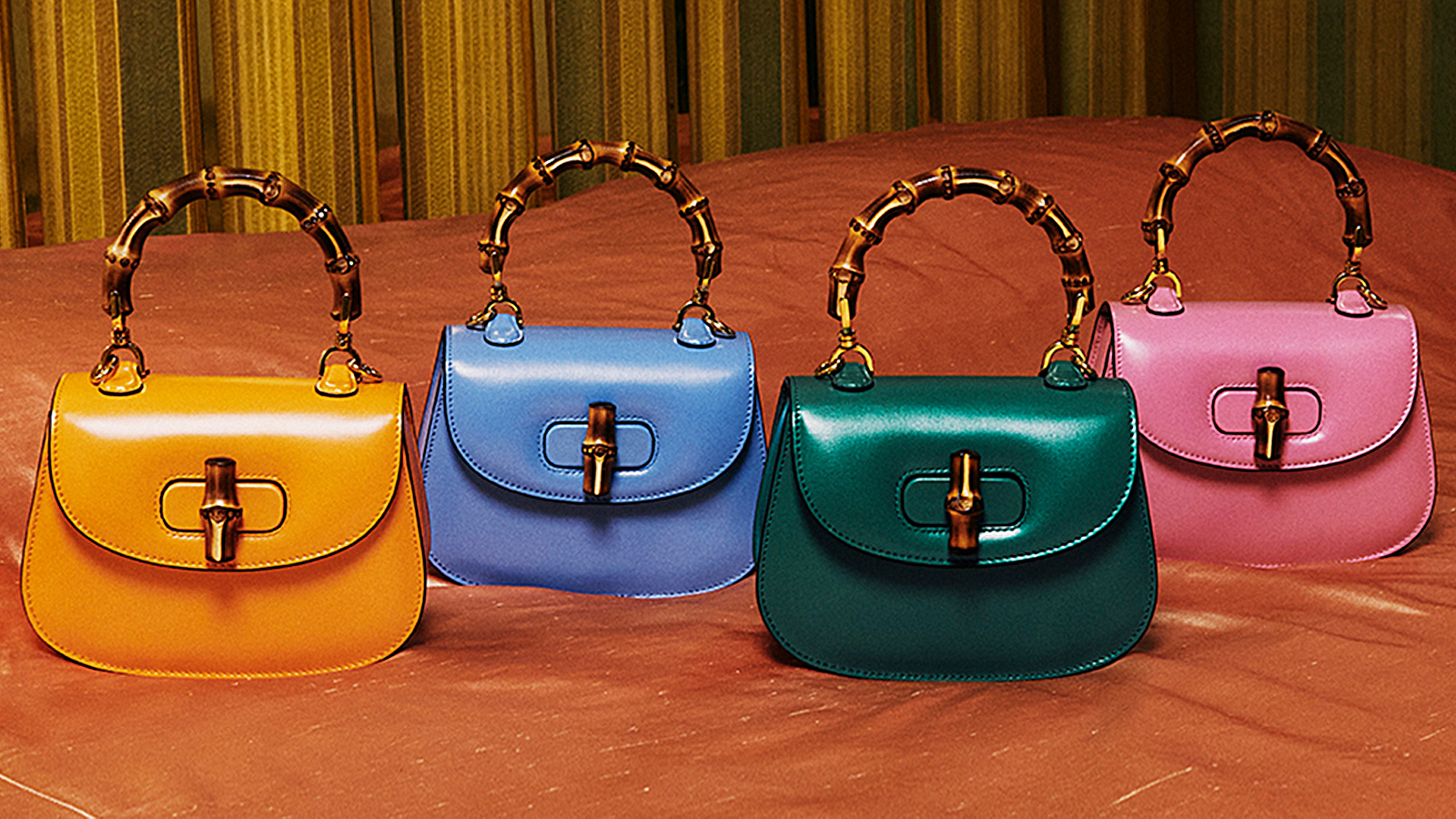 Get the Gucci Bamboo 1947 at Gucci boutiques and at gucci.com/sg.